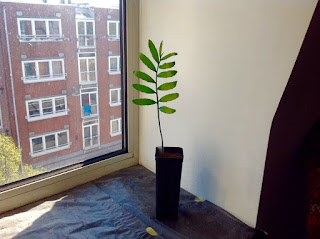 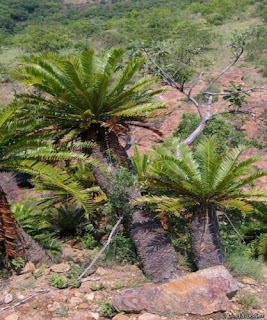 ENCEPHALARTOS SENTICOSUS
Locality: This species can be found in KwaZulu-Natal, South Africa and in the Lebombo mountains, Swaziland. There are also isolated populations reported in Mozambique along the border of Swaziland. This species is found in a variety of different habitats: from grasslands, to forests, to rocky hills and slopes, to sheer cliffs. The areas in which they are found are arid to semi-arid.
Plant Size: This is a medium to large sized species. The leaves on this species get about two meters long, and stems can reach heights of about four meters. This species can produce basal suckers, but generally not heavily.
Other Characteristics: This species is a beautiful green leafed cycad. It is a fairly fast grower and crowns tend to bee full and lush. This species is similar in its appearance to both Encephalartos lebomboensis (which this species shares habitat) and Encephalartos natalensis. Some of the key differences that can be observed is that E. senticosus have wooly apical crowns and female cones. The spination of the leaflets varies from the afore mentioned species as well. Female cones of this species are a yellowish tan color with smooth scales and are wooly. Male cones are a yellowish orange color.
Culture: In coastal and inland areas, this plant does well in full or partial sun. For desert areas, this species would do well in partial sun or filtered light. This species prefers a soil that drains well.
Landscape Usage: This is a showy, green species and should be placed as such. They do make spectacular shows and need some room. I would place them in the mid to far ranges of a planting (depending on what you are growing), but not over-crowd them so the can be viewed and appreciated.

Posted by Archimysticus at 12:35 PM